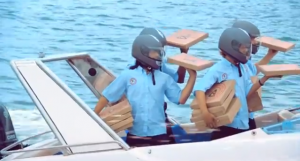 I once heard Scotland described as a beautiful country in which most of the population lived in a central band that stretched from Glasgow in the West to Edinburgh in the East. Except in August, in August all the locals get the heck out of Edinburgh and go to live somewhere else for a month. […]

Aaand a pleasant way to end #sugarsunday with the help of @iceangels_edin
Red eyes and dark humour! I approve.
#sugarsunday begins with pleasantly sculpted mountains of chocolate crunch from @mimisbakehouse
You can be as dumb as me and still see that @matto.pizza is pretty darn popular! Mainly takeaway, but I sat in the corner and wolfed pizza from the box.
I went for a little sample 🤘 including the one in the middle @donguero.taqueria doing @moonwakebeer taproom customers proud
At @moonwakebeer this weekend are the delicious @donguero.taqueria and rather than pick a taco I got the three deal and fish, pork and beef at once 🌮