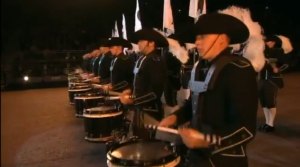 This video has earned more than 100,000 plays on YouTube and has been featured on sites like Neatorama, Laughing Squid and The Awesomer. It shows the Top Secret Drum Corps from Switzerland performing in the Edinburgh Military Tattoo. Here’s the catch; they’re not military, they’re not British or Commonwealth. They made it to Edinburgh Castle […]

Aaand a pleasant way to end #sugarsunday with the help of @iceangels_edin
Red eyes and dark humour! I approve.
#sugarsunday begins with pleasantly sculpted mountains of chocolate crunch from @mimisbakehouse
You can be as dumb as me and still see that @matto.pizza is pretty darn popular! Mainly takeaway, but I sat in the corner and wolfed pizza from the box.
I went for a little sample 🤘 including the one in the middle @donguero.taqueria doing @moonwakebeer taproom customers proud
At @moonwakebeer this weekend are the delicious @donguero.taqueria and rather than pick a taco I got the three deal and fish, pork and beef at once 🌮