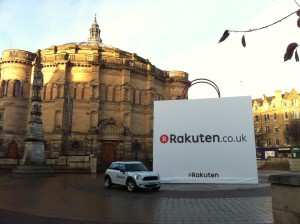 Have you seen the giant shopping bag in Bristo Square? It’s part of a campaign to get Edinburgh excited for Christmas by Rakuten Play. Rakuten is a big Japanese shopping site that bought Play.com a while back. Play’s now called Rakuten Play.com and the address on the bag is www.rakuten.co.uk. It’s a marketing campaign from […]

'You are enough", reminds mental health activist Coco
This pop-up at @bullfinchedin with @guisados_leith looks like a good thing to know about!
Oh yeah! @donguero.taqueria has a ROBUST selection of hot sauces!
This water run-off pipe clears the building but gives pedestrians a bit of a challenge. Not uncommon in Edinburgh.
Aaand a pleasant way to end #sugarsunday with the help of @iceangels_edin
Red eyes and dark humour! I approve.